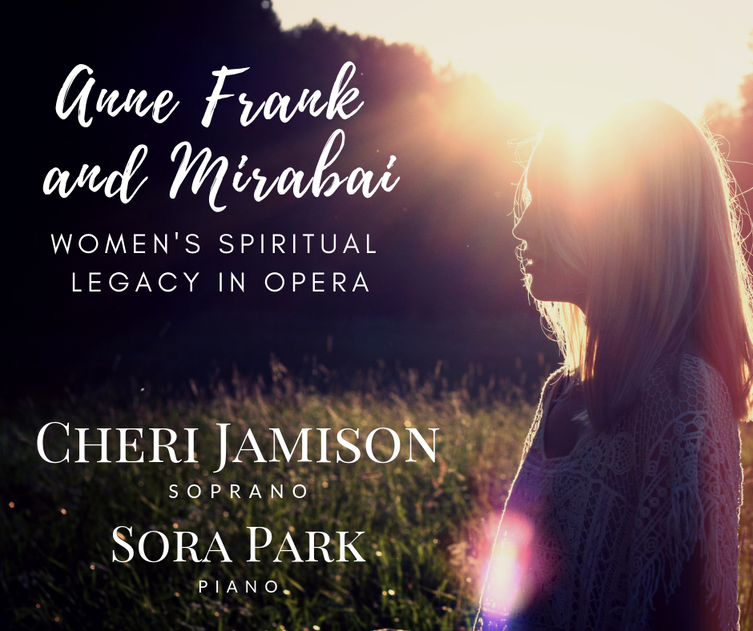 “Anne Frank and Mirabai: Women’s Spiritual Legacy in Opera”
Featuring soprano Cheri Jamison
Accompanied by Sora Park
​
This interfaith opera recital is musical and spiritual journey featuring two women who changed the world: 15-year-old Anne Frank, a Jewish girl during the Holocaust, and Mirabai, a Hindu in 16th-century India who (as legend has it) refused to throw herself on her husband’s funeral pyre and left her family to write ecstatic poetry to Krishna. ​
​
If you want to bring this concert to your local area, please fill out the Booking Inquiry form here!

"Diary of Anne Frank" The Opera

Music and Lyrics by Grigori Frid, based on "Diary of a Young Girl" by Anne Frank
This one-woman opera written in 1968 by Grigori Frid takes the listener on a journey with Anne Frank from the time she is gifted her diary through the 2 years she spent in hiding from the Nazis during WWII. Today's performance consists of excerpts from the full opera interspersed with actual entries from Anne Frank's diary. The music is not melodic in the traditional sense, but the leaps and sweeping vocal lines are very emotional, capturing the enthusiasm of Anne's lively spirit while conveying the gravity of her and her family's situation.

Anne Frank’s story is a reminder of the dangers of exclusion and discrimination. Yet, Anne’s legacy is not in what she could have been had she not been murdered in a concentration camp, but her resilience, self-reflection, and ultimate core belief that mankind was still “good at heart.” If a 15-year-old girl in her circumstance could choose that mindset, it calls us forward to do that, too.

Music by John Harbison, Poetry by Mirabai, English translation by Robert Bly.
"The Mirabai Songs" by John Harbison is a song cycle, not part of any opera, but a stand alone set of pieces containing musical and poetic themes. It's a beautiful complementary piece to "The Diary of Anne Frank" musically and stylistically. You'll notice similar expressive and virtuosic vocals, a piano accompaniment that mirrors an orchestra, and lyrics that are both conversational and transcendent.

Mirabai’s story is compelling. As young Hindu woman going against a brutal patriarchal tradition at the time in 16th century India, through her love of Krishna, she blazed a trail to become one of the most important poet-saints of the Bhakti movement. Mirabai’s poetry is like a glimpse into the soul and dharma of one dedicated to the path of devotion, humanizing and thus inspiring a more global understanding of that movement.

Mirabai's poetry is written to Krishna, one of the primary Gods of Hinduism, though she always calls him other names, such as The Dark One (he is often depicted with blue or dark skin), Dancing Energy, Mountain Energy, Holy One, etc. "He who lifts the mountains" refers to a story when Krishna lifted a mountain over an entire town like an umbrella to protect them from floods sent by another angry god. You'll hear references to reincarnation, a tenet of Hinduism and touching the soles (feet) of the guru, as a sign of reverence. Mirabai sang her songs fearlessly and publicly in the streets. She didn't care about family tradition and was persecuted for her unusual lifestyle choices. Yet her poetry endures centuries later, and Mirabai is now a cultural icon.

1. It’s True, I Went to the Market
My friend, I went to the market and bought the Dark One.
You claim by night, I claim by day.
Actually I was beating a drum all the time I was buying him.
You say I paid too much; I say too little.
Actually, I put him on the scale before I bought him.
What I paid was
my social body, my town body, my family body,
and all my inherited jewels.
Mirabai says: The Dark One is my husband now.
Be with me when I lie down; Be with me when I lie down.
You promised me this in an earlier life.

2. All I Was Doing Was Breathing
Something has reached out and taken in the beams of my eyes.
There is a longing, it is for his body,
for every hair of that dark body.
All I was doing was being
and the Dancing Energy came by my house.
His face looks curiously like the moon,
​I saw it from the side smiling.
My family says: “Don’t ever see him again!”
And imply things in a low voice.
But my eyes have their own life and they know whose they are.
I believe I can bear on my shoulders
whatever you want to say of me.
Mira says: Without the energy that lifts mountains,
how am I to live?

3. Why Mira Can’t Go Back to Her Old House
The colors of the Dark One have penetrated Mira’s body,
all the other colors washed out.
Making love with the Dark One and eating little,
those are my pearls and my carnelians.
Meditation beads and the forehead steak,
those are my scarves and my rings.
That’s enough feminine wiles for me.
My teacher taught me this:
Approve me or disapprove me,
I praise the Mountain Energy night and day!
I take the old ecstatic path.
I don’t steal money, I don’t hit anyone!
What will you charge me with?
I have felt the swaying of the elephant’s shoulders;
and now you want me to ride on a jackass?
Try to be serious!

4. Where Did You Go?
Where did you go, Holy One,
after you left my body?
Your flame jumped to the wick,
and then you disappeared and left the lamp alone.
You put the boat into the surf, and then walked inland,
leaving the boat in an ocean of parting.
Mira says: Tell me when you will come to meet me.

5. The Clouds
When I saw the dark clouds, I wept, O Dark One,
I wept at the dark clouds.
Black clouds soared up and took some yellow along.
Rain did fall, some rain fell long.
There was water east of the house, west of the house;
fields all green.
The one I love lives past those fields;
rain has fallen on my body, on my hair,
as I wait, as I wait in the open door for him.
The energy that holds up mountains
is the energy Mirabai bows down to.
He lives century after century,
and the test I set for him,
he has passed.

6. Don’t Go, Don’t Go
Don’t go, don’t go.
I touch your soles,
I’m sold to you.
Show me where to find the bhakti path,
show me where to go.
I would like my body to turn into a heap of incense and sandalwood
and you set a torch to it.
When I’ve fallen down to grey ashes,
smear me on your shoulders and chest.
Mira says: You who lift the mountains,
I have some Light,
​I want to mingle it with yours.
© 2023  Cheri Jamison.  All rights reserved. ​